ISRAEL CAUSED RUSSIAN METROJET CRASH IN EGYPT?
A victim of the Metrojet crash in Egypt.
An American infra-red satellite detected a heat flash seconds before the Russian plane fell from the sky, suggesting there was some sort of explosion on board.
dailymail.
The passengers "in the tail section of the liner died because of so-called blast injuries."
Signs of explosion
"Several military experts say a small bomb - either with a timer, or triggered by altitude - now appears to be the most likely cause of the Russian plane crash in Egypt's Sinai desert."
Russian plane crash: Experts say small bomb likely to blame for bringing down airliner over Sinai.
Russia's Tass news agency reported that debris not belonging to the plane was found at the crash site.
After Russian plane crash, a look at the security at Sharm

A victim of the Metrojet crash in Egypt.

An American infra-red satellite detected a heat flash seconds before the Russian plane fell from the sky, suggesting there was some sort of explosion on board.

The passengers "in the tail section of the liner died because of so-called blast injuries."

Russia's Tass news agency reported that debris not belonging to the plane was found at the crash site.

After Russian plane crash, a look at the security at Sharm

SUSPICIONS.
There is a belief that Israel used its spy base near the crash site to interfere with the Russian plane.
Egypt's Civil Aviation Authority reported that no Mayday signal was sent from the plane and that communication with the aircraft was normal until the aircraft disappeared from radar.
"This suggests that the normal communication links with the plane had been cut before the plane was remotely hijacked and sabotaged."
SUSPICIONS.

According to the London Independent, "At least 16 passengers due to fly on Metrojet flight 9268 did not board the plane on the day it crashed."

A victim of the Metrojet crash.

It looks as though Israel and its friends may have brought down the Russian Metrojet plane which crashed in Egypt on 31 October 2015.

Israel is angry that Russia has been frustrating its plans for Syria.

The Israeli Defence Forces has confirmed that it had intelligence assets in the region at the time of the crash.

Victim of the Metrojet crash.

Egypt's civil aviation minister Hossam Kamal said communications between the pilot and air traffic controllers were 'normal' ahead of the disaster.

'There was nothing abnormal... and the pilot didn't ask to change the plane's route,' he said, adding that the controllers recorded no distress calls.

His comments contradicted earlier claims that the pilot had reported technical difficulties and made clear his intention to land at the nearest airport.

.dailymail.
Airline spokeswoman Oxana Golovina said the airline's pilot Valery Nemov had more than 12,000 hours of flying experience with 3,860 on the Airbus A321.

She said: 'Our aircraft was in full working order, our crew was experienced, our pilot had a great deal of flying experience, so we don't know (what caused the crash).'

Victim of the Metrojet crash.
Professor Michael Clarke, Director General of the Royal United Services Institute says that early indications suggest that the jet may have been destroyed by a bomb on the aircraft.

"Early reports said it split into two and that suggests a catastrophic failure, not a mechanical failure, but perhaps an explosion on board, so I would be much more inclined to think, if we have to guess at this stage, it is much more likely to have been a bomb on board than a missile fired from the ground.

"And there’s no sign of a distress call, so the idea that the aircraft was undergoing a mechanical problem, or an engine problem, or a fire, or something like that, you would expect that there would be some sort of distress call beforehand.

"So the fact that there was a catastrophic failure at 31,000 feet, with the aircraft falling in two pieces, suggests to me an explosion on board. So was this caused by some form of terrible accident, which is unlikely, or a bomb, which is much more likely, my mind is moving in that direction rather than anything that happened on the ground."

There have been conflicting reports.

"Egyptian media had reported that the pilot radioed about technical problems and told air traffic controllers he needed to make an emergency landing.

"The plane was trying to land at the airport in the city of Al-Arish, in northern Sinai, when it crashed in the mountainous Hasana region, it was said."
Russian plane crash. 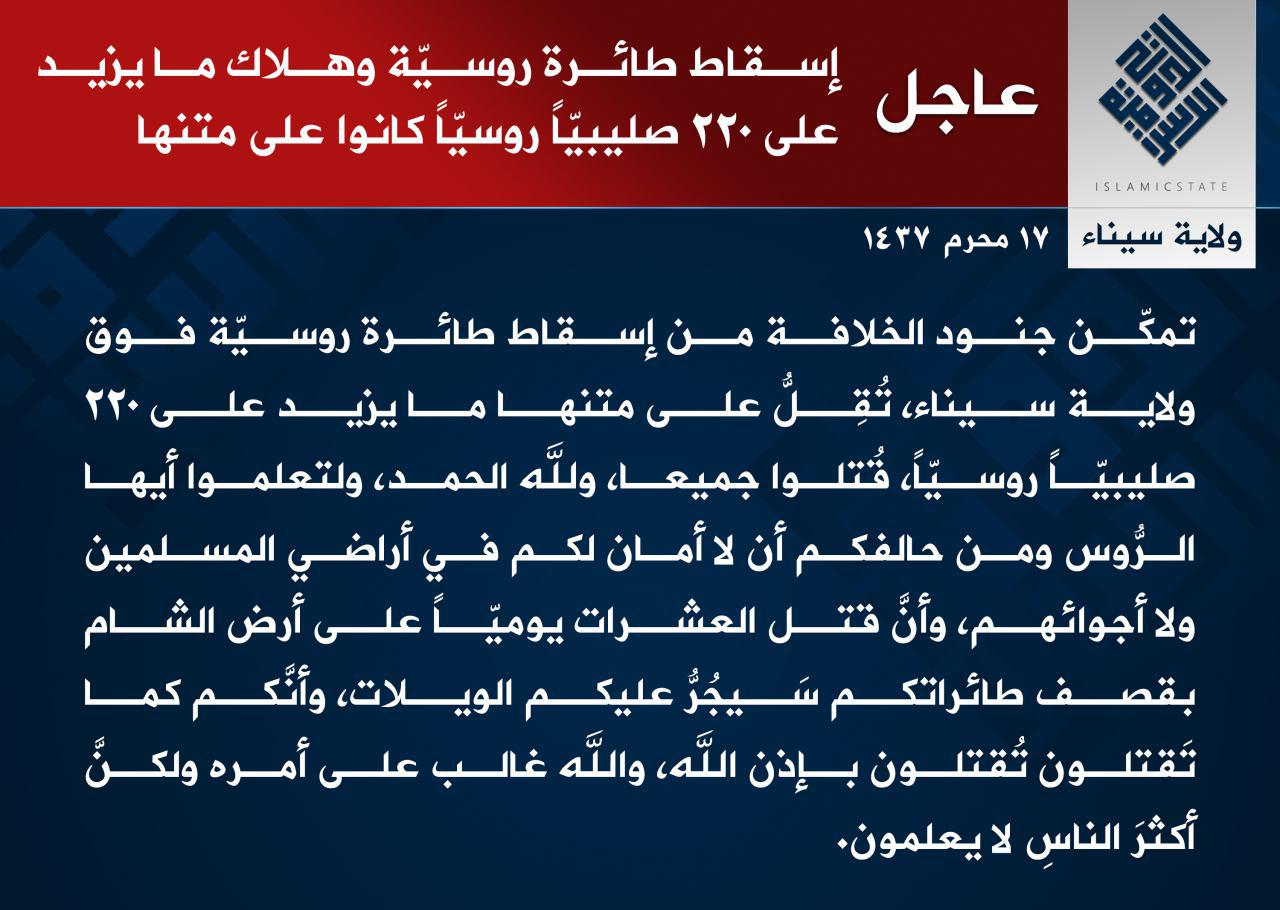 "ISIS (the CIA and its friends) were able to bring down a Russian plane above Sinai Province with at least 220 Russian crusaders aboard.

"They were all killed, praise be to God. O Russians, you and your allies take note that you are not safe in Muslim lands or their skies.

"The killing of dozens of ISIS forces daily in Syria with bombs from your planes will bring woe to you. Just as you are killing others, you too will be killed, God willing."
...
"John McCain confirmed the plan; everything is in place so you know we got cover from the US Senate.
"In Syria, Russians must be hit..."
Ukrainian Wikileaks: McCain plotting to bring down aircraft.

"Aviation sources claim the tail section of the aircraft shows evidence of 'the fuselage skin peeling outwards possibly indicative of a force acting outwards from within' - possibly a bomb - which could be linked to the earliest moments of the aircraft's disaster sequence."

The MetroJet Disaster was NO Accident.
http://aanirfan.blogspot.com/2015/10/russian-metrojet-crash-in-egypt.html