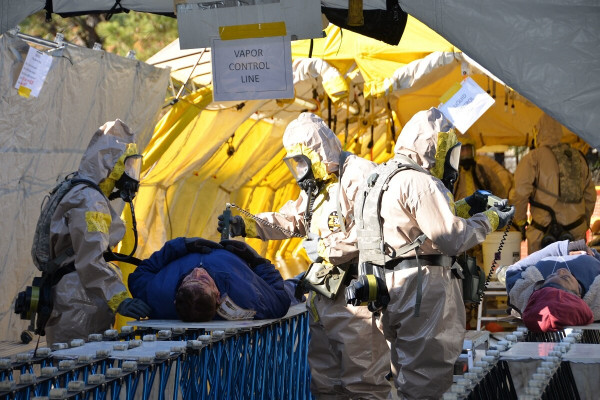 Точка происхождения, как полагают, синагога, где обнаружены первые случаи  корона-вируса, сообщает Нью-Йорк Таймс.
Эндрю Куомо
✔
@NYGovCuomo
Мы реализуем новые чрезвычайные меры в Нью-Рошель, которая имеет самый большой кластер случаев #Coronavirus в государстве.
The State of New York is activating the National Guard to establish a “containment area” to slow the spread of novel coronavirus within part of New Rochelle, New York, a suburb of New York City, Gov. Andrew Cuomo announced Tuesday.
Within the containment area, “schools, houses of worship and other large gathering facilities within a one-mile radius” of the outbreak’s epicenter will be closed for 14 days until March 25, according to a press release.
The National Guard will assist state health officials in New Rochelle, “mobilizing to deliver food to homes and help with cleaning public spaces in the containment area,” the release added.
Andrew Cuomo
✔
@NYGovCuomo
We are implementing new emergency measures in New Rochelle, which has the biggest cluster of #Coronavirus cases in the state.
Starting on Thursday for 2 wks, there will be a containment zone with a 1 mile radius around the site of the most cases in New Rochelle.
The point of origin is believed to be a synagogue where the first cases of coronavirus exposure were detected, according to the New York Times.
As of Tuesday, there were 108 reported cases in Westchester County, where New Rochelle is located, and 36 cases in New York City, according to the governor’s office and the New York State Department of Health. A total of 173 positive cases are reported statewide.
In the last 24 hours, Westchester County added 10 new cases, and New York City added 17 new cases, the release stated.
A state’s governor may activate the National Guard under Title 32 State Active Duty authority “in response to natural or man-made disasters or Homeland Defense missions.” Guardsmen remain under “command and control” of the Governor," according to the National Guard Bureau.
The activation of the National Guard comes after the Dr. Howard Zucker, state health commissioner for New York, designated the cases in New Rochelle as a “cluster.”
“We are moving from containment to mitigation, and because much of the transmission of this disease tends to happen on a geographic basis, we are attacking this hotspot at the source,” Cuomo said in the press conference. “As the number of positive cases rises, I am urging all New Yorkers to remember the bottom line: we talk about all this stuff to keep the public informed — not to incite fear — and if you are not a member of the vulnerable population then there is no reason for excess anxiety.”
“As we see the number of cases continue to rise based upon close contacts with persons who are positive for COVID-19, there is a particular need to reduce the opportunity for further close contacts,” Zucker said in the release. "These opportunities include schools, churches, synagogues, and other event spaces where large numbers of people gather and remain together for extended periods of time.
The announcement also stated the state is partnering with local health partners to set up a “satellite testing facility” in the area, the release added.
On March 7, Cuomo declared a state of emergency to streamline the state’s response to the virus’ spread.
“As we continue to provide essential updates and encourage people to act upon the facts on coronavirus instead of the hype, I have officially done a declaration of emergency which gives us certain powers to help local health departments that are very stressed,” Cuomo said at the time. "As the local health departments continue to monitor and quarantine people, we have a more expedited purchasing protocol to get them all the tools they need to contain the virus spread.
The state of emergency declaration affords greater powers to the governor to implement a comprehensive emergency management plan and introduce emergency sanitary regulations, among other measures.
According to the Centers for Disease Control and Prevention, there are 647 reported cases of COVID-19 in the United States, resulting in 25 deaths thus far.
The Wall Street Journal first reported this story.
This is a developing story. Stay with Military Times for additional updates.
About Dylan Gresik
Dylan Gresik is a reporting intern for Military Times through Northwestern University's Journalism Residency program.
Recommended For You
Troops forming crisis response forces at US-Mexico border checkpoints
Tens of thousands of VA workers left out of family leave benefits could soon see a fix
All US troops to leave Afghanistan in 14 months if Taliban meets commitments of peace deal
Some DoD civilian, Coast Guard families concerned about being bumped from military child care
Around The Web
Comments
Most Watched Videos
New WWII epic "Greyhound" trailer released | Newsbreak
In the upcoming movie "Greyhound", Tom Hanks goes back to WWII, this time reporting for duty in the North Atlantic as Commander of a U.S. Navy task force charged with protecting a convoy of supply ships from German U-boats.
promo
An Afghan peace plan, changes to the Air Force song, coronavirus and more |The Briefing 03.06.20
promo
What to do about the KC-46? | Defense News Weekly full episode: March 6, 2020
promo
Afghan ambassador to U.S. says nation working towards security | Military Times Reports
Top Headlines
New York National Guard activated to combat coronavirus, establish ‘containment area’
Tags: #coronavirus, Нью Амстердам, Нью Йорк, ж2, короновирус
Subscribe